Join INNIO Jenbacher and Clarke Energy for a free webinar on 10th June at 16:00 GMT discussing the future of renewable fuels for power generation.

Europe is aiming for carbon neutrality by 2050. It is a global transition that is centred on the transformation from a largely fossil-based to a low or even zero-carbon energy system. This implies strong growth of the well-known renewable power generation solutions such as the volatile wind and solar PV (RES). But maintaining a stable and steady energy supply requires a flexible backup solution, which can best be provided by dispatchable gas power plants, ideally with flexible gas engines running on renewable gas.

INNIO Jenbacher is well positioned as a thought leader on e-fuels:

– About 6,000 INNIO European Jenbacher gas engines are running on biogas and biomethane
– Hydrogen, green synthetic methane and methanol are the future fuels for gas engines
– Gas engines are an excellent technology for natural gas as well as for 100% renewable fuels 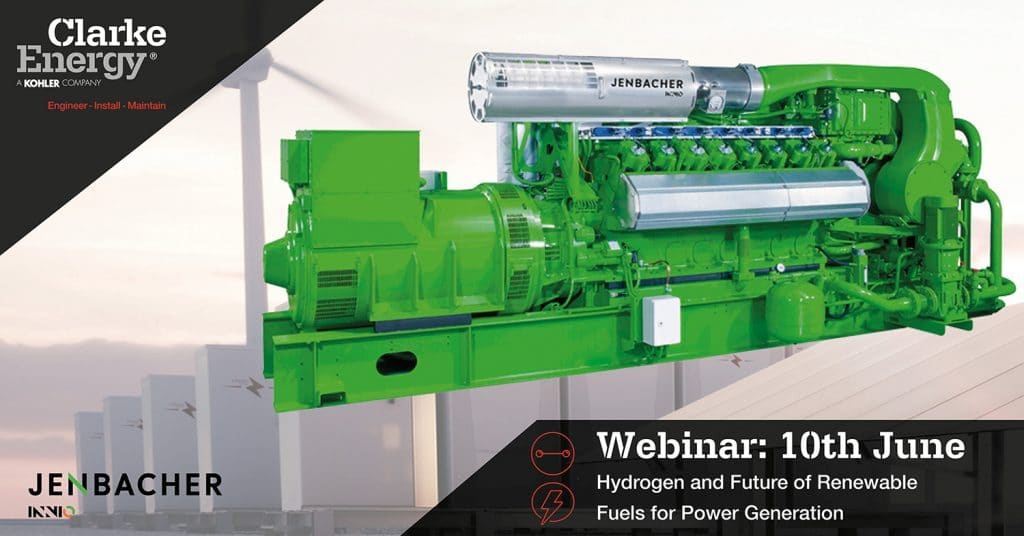 Martin Schneider – Senior Product Manager – INNIO Jenbacher
Adam Wray-Summerson – Project and Market Development Manager – Clarke Energy
Adam Wray-Summerson is a Chartered Engineer with a passion for energy efficiency and sustainability.Adam graduated with a master’s degree in Aerospace Engineering from the University of Liverpool in 2008 before embarking on his career with Clarke Energy. Adam has held roles, focussed on application design, technical sales, project development and a secondment to the United States in 2018 as Sales Director.At Clarke he has helped develop specialist solutions in power generation applications throughout the UK, Ireland, United States and Africa.

Dr Klaus Paryhuber – Strategic Product Development – INNIO JenbacherDr. Klaus Payrhuber has worked in the Power Generation industry since 1998, and for INNIO Jenbacher since 2009, where he currently holds a marketing manager position. In this role he is focused on positioning reciprocating engines in the various segments of power generation and its applications: Klaus is also responsible for strategic product developments.

What has been achieved so far:

Highly efficient cogeneration of power and heat or cold is the typical application for gas engine solutions provided by INNIO Jenbacher.

More than 80% of the 12,000-plus Jenbacher gas engines installed in Europe are running as CHP application. A gas engine CHP system typically use about 30% less primary energy compared to the separate generation of power and heat and can reduce specific carbon emissions by about 50% replacing the heat provided by a gas boiler.

Most of the newer CHP installations in Europe are combined with a heat storage, which allows decoupling of power and heat supply, while still achieving highest fuel utilization. The gas engines run mainly when wind and solar are less available or electricity demand is high. This makes gas engines CHP power plants a very flexible and highly efficient power generation solution that complements the volatile RES.

Biogas and biomethane are the most common carbon neutral gases used for gas engines.

INNIO Jenbacher alone has about 6,000 biogas engines installed in Europe that are converting raw biogas and biomethane into electricity and heat. Biogas is one of the most common dispatchable and reliable renewable energy source, and at the same time it can be used for distributed power and heat generation at the point of use.

INNIO’s mature and efficient gas engine technology can be used for continuous or flexible operation with raw biogas from crops, agricultural and municipal waste, landfill or sewage sludge.

Biomethane is upgraded raw biogas with natural gas pipeline quality. It can be injected into the natural gas system without limitations and is therefore an ideal fuel for gas engines and any other end consumer of gas. As biomethane is injected to the gas network it can participate from the existing gas storage system and can therefore be considered as a renewable energy storage.

What are the green fuels of the future?

Green synthetic methane as the ideal addition and replacement for natural gas.
Synthetic methane is produced with methanation from green hydrogen. Because it has the same physical properties as natural gas, it can be injected into the natural gas system without limitations and modifications on the gas infrastructure. All end consumers of gas, including gas engines can continue to run reliably with current optimized performance and emission standards.

Green methanol as a carbon-neutral fuel for gas engines.

Like synthetic methane, methanol is produced from green or blue hydrogen. Methanol is widely used as a chemical base product; it is liquid and has the advantage of being easily storable and transportable. Apart from its use in stationary engines, it can be used for land or sea transport, and it is a perfect alternative for areas without a connection to the gas grid. Islands, microgrids or remote areas that today rely on diesel or heavy fuel easily could be transitioned to methanol.

Gas engines could run on methanol with some modifications, and the same infrastructure could be used without major changes. The switch from heavy fuel and diesel to a carbon neutral solution with methanol is a very promising alternative for many remote areas around the world.

Green hydrogen as a carbon-free fuel.

Hydrogen can play an important role in replacing fossil natural gas. It is basically carbon free and can be used as a fuel for gas engines. Over the next decades, the further growth of wind parks and PV installations could provide green hydrogen via power-to-gas. Although different than natural gas, hydrogen can be transported via pipelines and tanks, and to some extent existing natural gas infrastructure could be used. Finally, hydrogen can be used in different sectors like the industry, heating, transportation and power generation.

What is important to know:

Green gas cogeneration and >90% fuel utilization
Jenbacher gas engines can achieve 90% and more fuel utilization when installed as CHP applications. This typically use about 30% less primary energy compared to the separate generation of power and heat.

As renewable fuels are more expensive than natural gas and there is a scarcity in availability, it is even more important that we reduce primary energy input as much as possible. Combined with the installation of heat storages systems, gas engine CHP plants can operate very flexibly. Gas engines CHP plants are therefore a

dispatchable renewable energy source (dRES), and an ideal complement to volatile RES such as wind and solar.

Conclusion:
Using renewable gases in gas engine power plants is less costly than a purely electric energy system with its need for a massive electricity grid expansion and very high storage capacities to ensure enough backup. While we as an industry can provide the technology, policy needs to ensure that the renewable fuels to support the ongoing transformation of the energy system become available – may they be biomethane or may they come as synthetic methane, green methanol or even as hydrogen from renewable sources.

Gas engines are an excellent technology providing affordable distributed power and heat with high fuel utilization rates above 90% and running on a wide range of carbon free or carbon neutral fuels making them a dispatchable renewable energy source.

A predictable roadmap is needed to provide a reliable framework for technology development and for creating the necessary trust for investors. Such a roadmap should include targets for replacing shares of the fossil gas supply with renewable gases. These targets, similar to the renewable electricity target should be accompanied by national plans detailing how to achieve them. In parallel, technical standards and regulatory frameworks must be adjusted and synchronized with the implementation roadmap in due time. It is important to avoid early adaption of standards and frameworks such as for natural gas / hydrogen mixtures in pipeline gas long before they become available, because this would lead to unnecessary high costs and less energy efficiency.

Interested in e-fuels for your power generation projects? Together with our distributor Clarke-Energy our experts we will share our in-depth understanding and experience with these fuel types and help you to decide how they can help you.