Biogas is formed by the anaerobic decomposition of putrescible organic material. Biogas can either be used to generate electricity and heat via a combined heat and power gas engine, or can be cleaned to produce pure biomethane via biogas upgrading.

Biogas is a renewable gas that is produced by anaerobic microorganisms. These microbes feed off carbohydrates and fats, producing methane and carbon dioxides as metabolic waste products. This gas can be harnessed by man as a source of sustainable energy.

Biogas is a renewable fuel as it originates from organic material that has been created from atmospheric carbon by plants grown within recent growing seasons and is part of the short-term carbon cycle.

Benefits of anaerobic digestion and biogas 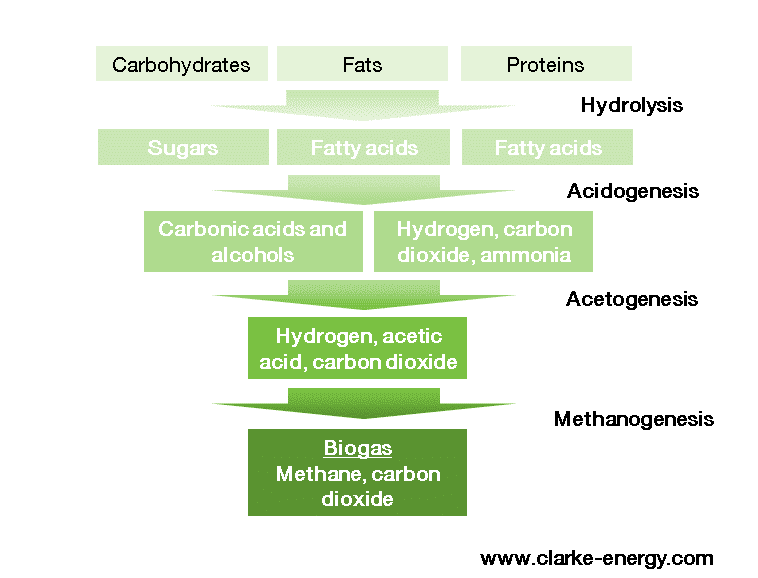 Biogas creation is also called biomethanation. Biologically derived gases are produced as metabolic products of two groups of microorganisms called bacteria and Archaea. These microorganisms feed off carbohydrates, fats and proteins, then through a complex series of reactions including hydrolysis, acetogenesis, acidogenesis and methanogenesis produce biogas consisting mainly of carbon dioxide and methane. 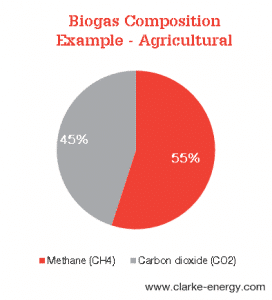 Biogas consists primarily of methane (the source of energy within the fuel) and carbon dioxide. It also may contain small amounts of nitrogen or hydrogen. Contaminants in the biogas can include sulphur or siloxanes, but this will depend upon the digester feedstock.

The relative percentages of methane and carbon dioxide in the biogas are influenced by several factors including:

Anaerobic digestion is the man-made process of harnessing the anaerobic fermentation of wastes and other biodegradable materials. Anaerobic microbes can be harnessed to treat problematic wastes, produce a fertiliser that can be used to replace high carbon emission chemical fertilisers. It also is the process that results in the production of biogas, which can be used to provide renewable power using biogas cogeneration systems. 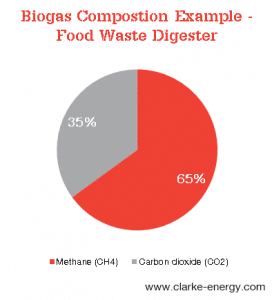 Anaerobic digestion can occur at mesophilic (35-45˚C) or thermophilic temperatures (50-60˚C). Both types of digestion typically require supplementary sources of heat to reach their optimal temperature. This heat is typically by a biogas CHP unit, operating on biogas and producing both electricity and heat for the process.

Often, biogas plants that treat wastes originating from animal material, will also require the material to be treated at high temperature to eliminate any disease-causing bacteria in the slurry. These systems pasteurise the slurry, typically at 90°C for one hour, to destroy pathogens, and result in the provision of clean, high quality fertiliser.

Jenbacher biogas engines are specifically designed to operate on different types of biogas. These gas engines are linked to an alternator in order to produce electricity at high efficiency. High efficiency electricity production enables the end user to maximise the electrical output from the biogas and hence optimise the economic performance of the anaerobic digestion plant.

There are 4 ‘types’ of Jenbacher gas engines with different levels of power output and electrical/thermal efficiency characteristics.

Biologically-derived gases can be utilised in biogas engines to generate renewable power via cogeneration in the form of electricity and heat. The electricity can be used to power the surrounding equipment or exported to the national grid.

Low grade heat from the cooling circuits of the gas engine, typically available as hot water on a 70/90°C flow/return basis. For anaerobic digestion plants that are using a CHP engine, there are two key types of heat:

You can find out more about biogas CHP efficiency here.

High temperature exhaust gas heat can either be used directly into a drier or waste heat boiler . Alternatively, it can be converted into hot water using a shell and tube exhaust gas heat exchanger to supplement the heat from the engine cooling systems.

Waste heat boilers produce steam typically at 8-15bar. Driers may be useful to reduce the moisture content of the digestate to assist in reducing transportation costs.

In the event that the local legislation requires for the destruction of pathogens in the digestate (such as the European Animal By-Products Regulations) there may be the requirement to heat treat the waste via pasteurisation or sterilisation. Here, surplus heat from the gas engine can be used in the pasteurisation unit.

The heat from the CHP engine can also be used to drive an absorption chiller to give a source of cooling, converting the system to a trigeneration plant.

Different biogas sectors have different business case characteristics. These are summarised in the table below. 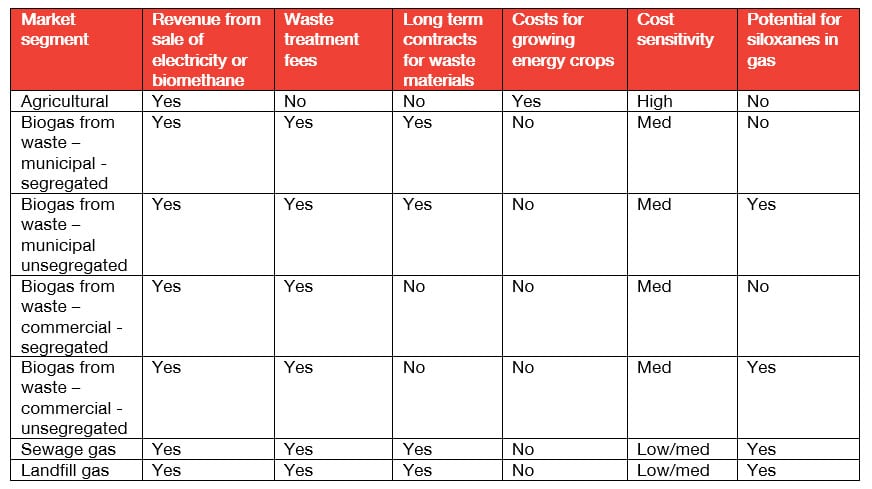 Biological gases contain water vapour due to the nature of the feedstock that produces the gas. The quantity of water is linked to the temperature of the biological gas and the method of production. Above certain limits the moisture content of the biogas becomes a combustion challenge for the gas engines.

Water can be removed from the gas by using:

Hydrogen sulphide (H2S) is derived as a by-product of the anaerobic digestion process of high sulphur feedstocks such as amino-acids and proteins. When burnt in a gas engine hydrogen sulphide can condense with water to form sulphuric acid. Sulphuric acid is corrosive to elements of gas engines and so must be limited to prevent adverse effects on the CHP engine.

Processes for the removal of hydrogen sulphide include

In some cases, biogas contains siloxanes. Siloxanes are formed from the anaerobic decomposition of materials commonly found in soaps and detergents. During the combustion process of the gas that contains siloxanes, silicon is released and can combine with free oxygen or various other elements in the combustion gas. Deposits are formed containing mostly silica (SiO2) or silicates (SixOy). These white mineral deposits accumulate and must be removed by chemical or mechanical means.

Siloxanes are often problematic in landfill gas and sewage gas plants due to contamination that is often found associated with the organic wastes.

In source-segregated biodegradable waste and agricultural biogas plants, it is much less common to find problems associated with siloxanes.