Clarke Energy started trading in 1989, providing spare parts world-wide to users of marine, industrial and locomotive diesel engines. The company at that time was based in Aintree near Liverpool and was head by Jim Clarke. By 1992 the company had grown to 40 people and had an increasing turnover. In 1992 new purpose-built premises were purchased at Unity Grove, Knowsley Business Park in Liverpool. 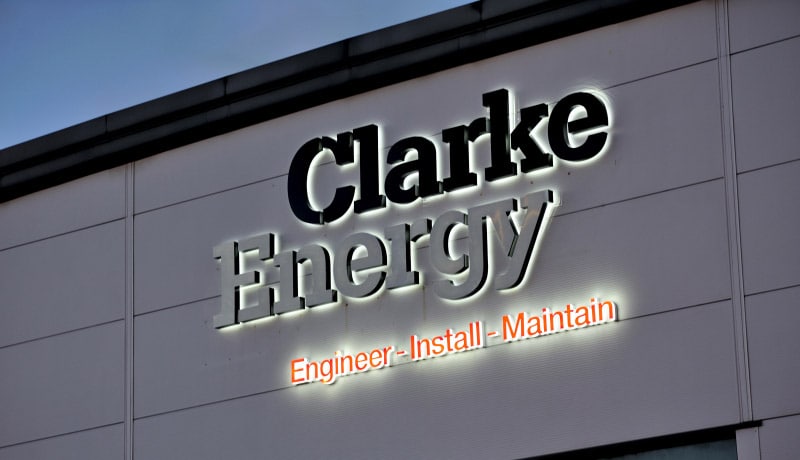 From Strength to Strength

The company has continued to grow and now provides employment for a workforce of over 1,200 globally. The company moved to its international headquarters, ‘Power House’, in 2000 which are situated in Knowsley Business Park near Liverpool.

The Clarke Energy of today has transformed dramatically since Jim Clarke first took a controlling stake in the company. Jim set about restructuring what was at that time a diesel engine spare parts and service business. The first few years saw many changes, which eventually led to Jim taking complete ownership. A key milestone came in 1995 when the company was appointed as the exclusive UK distributor for Jenbacher. 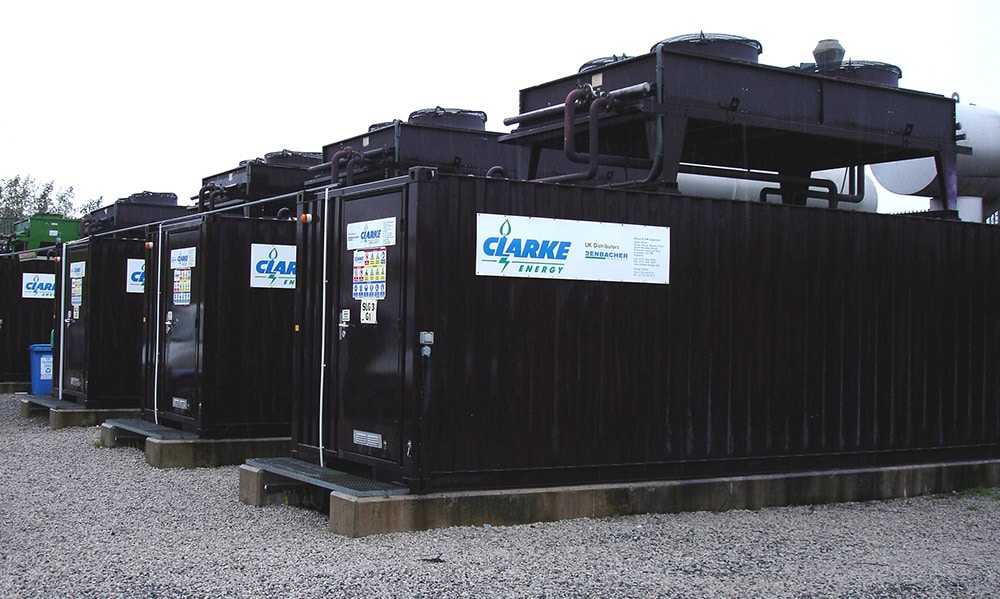 Jenbacher was acquired by GE in 2003 and is one of the world’s leading manufacturers of reciprocating engines and co-generation units. Clarke Energy’s ongoing successful relationship with Jenbacher is the company’s approach to delivering quality engineered facilities supported by a strong service-based operation. The company has a reputation for integrity along with top quality, reliable and accountable customer service.

In 1997 the company changed its name to Clarke Energy Ltd. Since this point in time Clarke Energy has helped develop many cutting-edge renewable and high efficiency gas generation projects including some of the early landfill gas power plants, CHP facilities (such as at Dundee University), coal mine methane and more recently quad-generation plants. Complimentary to the installation of these units, the company has developed dedicated Jenbacher product service support facilities with remote monitoring, spare parts stock-holding. The company also has two of the few authorised Jenbacher full engine rebuild and refurbishment facilities globally, in both Knowsley and Dhaka. On the back of the successful partnership between Clarke Energy and Jenbacher, the company began to expand overseas. 1998 saw Clarke Energy being awarded with the distributorship in Australia and New Zealand, soon followed by Nigeria in 1999. 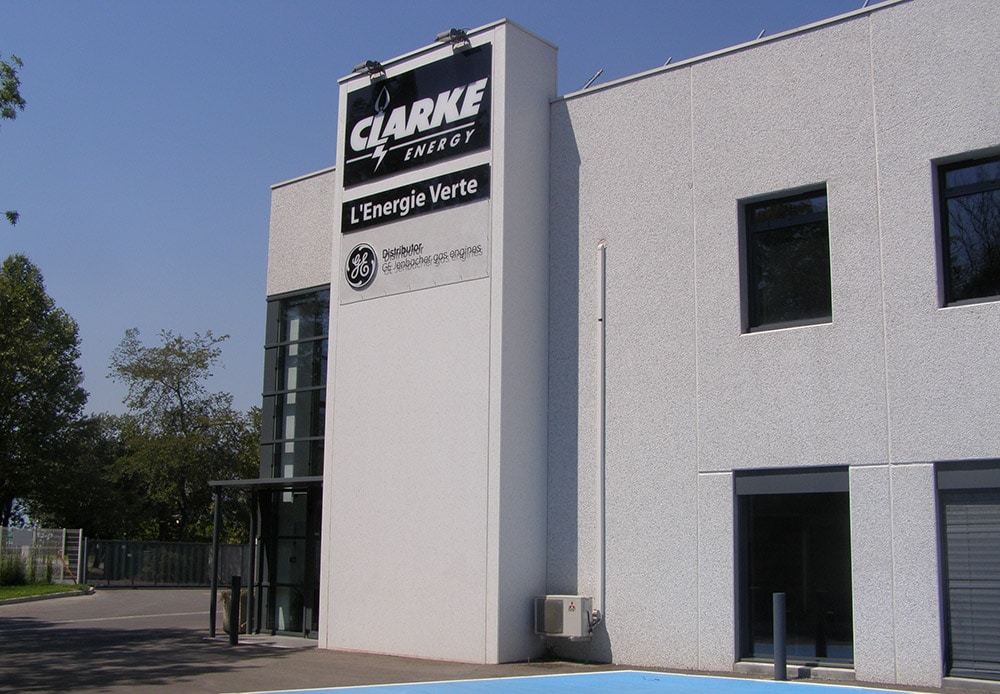 Clarke Energy expanded into France in 2004

In 1999 the company successfully attracted investment from 3i plc to enable it to ramp up its ambitions for growth. It was then only a few years until the acquisition of Cogen India and Jenbacher France in 2003 and 2004 to further expand Clarke Energy worldwide. Completing the current Clarke Energy worldwide offices are Ireland (opened in 2005), Tunisia (in 2008), Algeria (2011), Tanzania (2012) and  Bangladesh (Following the acquisition of Orient Energy’s Bangladeshi operations in 2013), South Africa (following the acquisition of GE’s South African Jenbacher service business and Agaricus Trading in 2013) and Cameroon (2015). In 2017 Clarke Energy moved into the USA, Papua New Guinea, Morocco, Kenya, the Democratic Republic of the Congo, Rwanda, Ghana and Ivory Coast. In 2019 Clarke Energy acquired TEB of Romania and Genelco of Greece followed by CoEnergy America bringing smaller CHP units into the portfolio of products.

Since 1989, the company has continued to grow year on year with employee numbers and turnover figures consistently rising. In 2010 Jamie Clarke, Jim’s son, was promoted to become Chief Executive Officer, with Jim retaining the position of Chairman. Also in 2010, following a successful ten-year relationship, the company completed the buy-back of shares from 3i. As part of plans for ongoing future expansion, in 2012 ECI partners bought a minority stake in Clarke Energy. 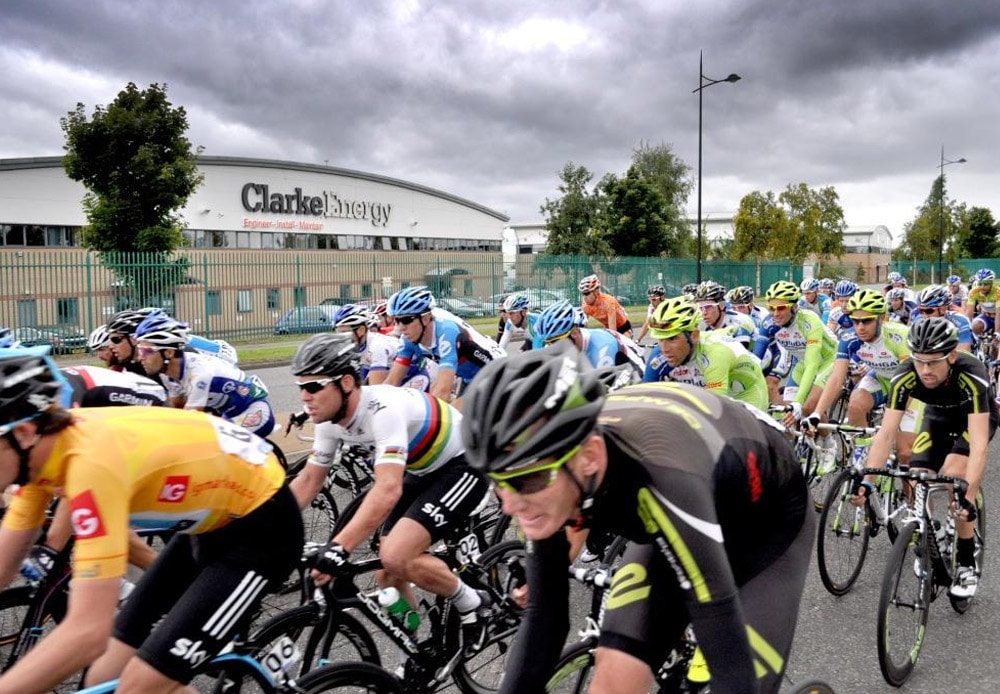 The Tour of Britain passes Clarke Energy headquarters in Knowsley

In February 2017 Clarke Energy was acquired by the Kohler Company of Wisconsin. Clarke Energy’s retains its senior management team.

In 2018 it was announced that Advent International had completed the acquisition of Jenbacher and Waukesha from GE and rebranded as INNIO Power and remains one of the world’s leading manufacturers of reciprocating engines and co-generation units.