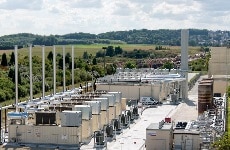 With the opening of the cogeneration project, Plessis-Gassot becomes the first town in France to have a district heating scheme fuelled by biogas. In addition to electricity, the cogeneration facility also produces 30,000 MWh/year of thermal energy, equivalent to the amount consumed by an estimated 2,850 homes. This energy is feeding a new heating and hot water network that serves homes and shared facilities in Plessis-Gassot, including the town hall, community center, church and municipal building. As a result, the electric heating bills for Plessis-Gassot residents who are connected to the grid supplied by Electr’od are expected to fall by 92 percent.

“Our newly commissioned and upgraded landfill gas power plant will deliver renewable power to the French electricity network. We selected Clarke Energy and GE’s Jenbacher gas engines for this project due to their experience in offering increased efficiency and a reliable supply of renewable energy,” said Véolia Propreté Managing Director Bernard Harambillet.

Clarke Energy, GRS Valtech and Dalkia implemented the design, construction and operation of the repowering project on behalf of Véolia Propreté. Specifically, Dalkia is leading the operation of the new Electr’od power plant, optimising the export of power and energy recovery. Clarke Energy engineered, installed and will maintain the facility to ensure high levels of equipment availability, and GRS Valtech provided the equipment for the landfill gas pre-treatment process.

“As the largest landfill gas power plant in France and the first installation of our Type 6 technology for landfills in France, this project demonstrates how our fuel-flexible Jenbacher gas engines can provide more power with increased efficiency,” said Karl Wetzlmayer, general manager—gas engines for GE Power & Water’s Distributed Power. “By using our Jenbacher J620 landfill gas engines, Véolia Propreté will experience the benefits of GE’s extensive experience and proven technology.”

GE Power & Water’s Distributed Power business is a leading provider of power equipment, engines and services, focused on power generation at or near the point of use. Distributed Power’s product portfolio includes GE’s aeroderivative gas turbines and reciprocating engines, which generate 100 kilowatts to 100 MW of power for numerous industries globally. Headquartered in Cincinnati, Ohio, Distributed Power employs about 5,000 people around the world.

Clarke Energy is a leader in the engineering design, installation and long-term maintenance of gas engine-based power plants. The company is the authorised distributor and service provider for GE’s Jenbacher gas engines in 16 countries. Clarke Energy employs over 950 staff and has over 3,900 MW of Jenbacher generation equipment installed in its operational areas.

GE (NYSE: GE) works on things that matter. The best people and the best technologies taking on the toughest challenges. Finding solutions in energy, health and home, transportation and finance. Building, powering, moving and curing the world. Not just imagining. Doing. GE works. For more information, visit the company’s website at www.ge.com.