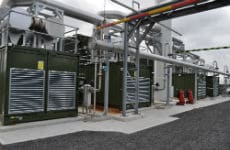 The Irish Drehid Waste Management facility opened in 2008 to manage up to 360,000 tonnes of residual waste, including municipal, commercial and industrial waste. Bord na Móna has now taken its operations in this location one step further. The ‘Landfill Gas Utilisation Project’ was inaugurated in April 2014.

After the landfill was up and running, Bord na Móna started working on a ‘Landfill Gas Utilisation Project’ that would create renewable energy from the waste that was brought into the site. At the site over 6,000 tonnes of methane is burned and turned into carbon dioxide and water. If vented into the atmosphere methane is a 21 times more hazardous greenhouse gas than carbon dioxide. Using the methane to produce renewable energy thus has a positive impact on the environment. 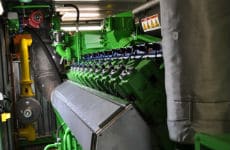 Clarke Energy’s Irish operations have supplied 4 of GE’s containerised Jenbacher JGC420GS-LL gas engines for this project to produce a total of 5.6MWe of renewable power, which is the equivalent of powering more than 8,500 standard homes.

Jenbacher engines are known to deliver high efficiency and reliability when operating on challenging gases such as landfill and biogas. The design and installation of the landfill gas utilisation system was focused on ensuring maximum noise reduction and minimising the emissions in the local environment.