King’s Cross Development to be Powered by GE Jenbacher 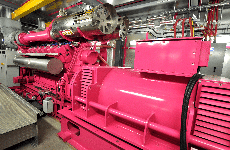 The first of three 2 MW GE Jenbacher CHP systems, provided by Clarke Energy, has been installed at the on-site energy centre by Clarke Energy in King’s Cross which together will supply 100% of the development’s heat and offset almost 80% of its electrical power demand.

The deal between GE and the King’s Cross Central Limited Partnership is focused on the long term sustainability of the development and the first engine is due to be commissioned by Clarke Energy this summer. 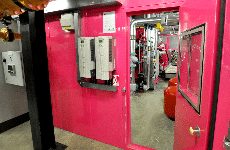 Once commissioned, the CHP engine will not only generate electricity, which will be fed into the grid network, but will also provide heat for the development wide District Heating System (DHS). All of the 70 buildings at King’s Cross, from the University of Arts to the Camden Council building, BNP Paribas Real Estate’s new offices and the Great Northern Hotel, will be connected to the DHS When complete carbon emissions are expected to be a third less than ‘business as usual’ and up to 60% less than 2001 levels.Ki

Uniquely, the GE Jenbacher gas engine has been painted pink (they are normally green) to support Breast Cancer Research and affectionately called the Pink Panther. To celebrate the engine’s arrival at King’s Cross, members of the team working on the project have organised a 750 mile charity cycle ride from Jenbach, in Austria, where the engine was built to King’s Cross, in central London. The team’s ride from 12-20 May saw them cycle on average 85 miles per day, through the Alps, Germany and France, and aims to raise in excess of £30,000 for two charities – Breast Cancer Research and Global Generation, a local charity in the King’s Cross area which gives young people opportunities to play a part in creating a sustainable future.

At the end of the cycle ride, King’s Cross Central Limited Partnership will sign an order for the second of GE’s Jenbacher CHP system for the site. The second engine is planned for commissioning in 2013. 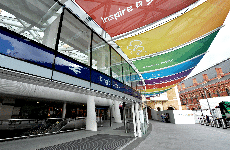 GE’s Director of Urban Development Chris Smith will be participating in the cycle ride from 12-20 May. Smith commented, “GE is proud to participate in the cycle ride raising awareness of breast cancer and its treatment. Building and supplying the first-ever pink Jenbacher CHP system to King’s Cross is a fun way to highlight a very serious cause, while providing Kings Cross with a major component of the development. We value our long-standing relationship with the King’s Cross Central Limited Partnership and we look forward to continuing to support their energy requirements.”

Clare Hebbes, from the King’s Cross Central Limited Partnership, said, “Through our work with GE, we expect to exceed many of the targets we have set for King’s Cross as a genuine 21st century sustainable city centre development. GE understands what leading technologies are available and how best to apply them to a piece of city like King’s Cross. This starts with the CHP and we anticipate many other initiatives in the years ahead. Both GE and us share a common vision when it comes to sustainability and we are therefore delighted to be working with them at King’s Cross. We are training hard for the 750 mile cycle ride – the fact we are raising money for two important causes, Breast Cancer Research and local charity Global Generation, which we have been supporting for some time with projects such as the skip garden, will hopefully get us up the hills in the Alps.”