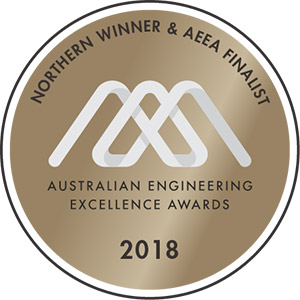 Clarke Energy was announced as the winner of ‘Infrastructure Project 2018’ by Engineers Australia at the Australian Engineering Excellence Awards, Northern Division on the 17th August in Darwin.

Clarke Energy’s submission for the award was based on their detailed engineering, procurement and construction works on the Owen Springs Power Station Expansion Project during the period 2016 to 2018.

Clarke Energy’s role in the project comprises of the design, construction, service and maintenance of a 44MWe gas fired power station located in Alice Springs, Australia.

The project involved the installation of ten high-efficiency, Jenbacher J624, gas-fired reciprocating engines, each connected to the existing natural-gas pipeline.

This was a massive undertaking, as each of the 56 tonne generators had to be shipped from Austria and then road freighted over-land from Adelaide, over 1500 kilometres away.

As well as improving efficiency, reducing maintenance costs and the environmental footprint, the project significantly improves the territory’s baseload capacity and has provided more jobs for the area.

The new generators will lead to a reduction in greenhouse gas emissions for the Northern Territory as a whole, helping the Territory government to reach their 50% emissions reduction target for 2030.

The construction of the power station was a mix of complex challenges ranging from fuel gas methane number fluctuations to the integration of multiple electrical connections within the existing power transmission infrastructure.

Despite continuous time pressure, there were over 140,000 man hours of work completed with no lost time injuries or environmental incidents. This achievement alone attests to the health and safety culture that every member within Clarke Energy’s organisation embraces.

Clarke Energy is proud of its engineering and project management capability and seeks to continuously ‘raise the bar’ when it comes to the engineering excellence in their projects.