Disposal and treatment of biological waste represent a major challenge for the waste industry. For a wide range of organic substances from agriculture, foodstuff of feed industries, anaerobic digestion is a superior alternative to composting as it is a net-energy producer.

Biogas – a mixture of both methane and carbon dioxide – is created during anaerobic digestion and serves as a high-energy renewable fuel that can be used as a substitute for fossil fuels. Biogas-fueled engines or biogas upgrading plants improved waste management while maximizing the use of an economical energy supply.

Creation of Biogas from Organic Waste

Biogas results from anaerobic fermentation of organic materials, typically occurring within large tanks called anaerobic digesters that exclude atmospheric oxygen. As a metabolic product of the participating methanogens and acidogenic bacteria, the prerequisites for its production are a lack of oxygen, a pH value from 6.5 to 7.5 and a constant temperature of 35-45°C (mesophilic) or 45-55°C (thermophilic). The digestion period or retention period is typically between 10 and 30 days depending upon the type of digestion employed. The anaerobic digestion systems of today operate largely within the mesophilic temperature range.

The process of biogas generation is divided into four steps:

Initially the feedstock to the digesters is received in a primary pit or liquid storage tank.

Pre-treatment is an important consideration when deploying food waste anaerobic digesters. This includes various different technologies that might include shredding, ball mills, metal removal technology and conversion into a slurry or pulp.

From here it is loaded into the digester by various means depending upon the constitution of waste materials. In the digestion tanks a series of biological processes are harnessed in order to produce biogas. Hydrolysis is the process where the organic material is solubilized into the digestion liquid. It then undergoes the intermediate steps of acidogenesis and acetogenesis which create the precursor molecules for methanogenesis. Methanogens feed off these precursors and produce methane as a cellular waste product.

The biogas containing this biologically derived methane is contained and captured in a gas storage tank which is located separately to the main digester, or alternatively can form its roof. The gas storage tank acts as a buffer in order to balance fluctuations in the production of gas in the digesters. The biogas is then converted into renewable power in the form of electricity and heat via cogeneration / CHP with gas engines. 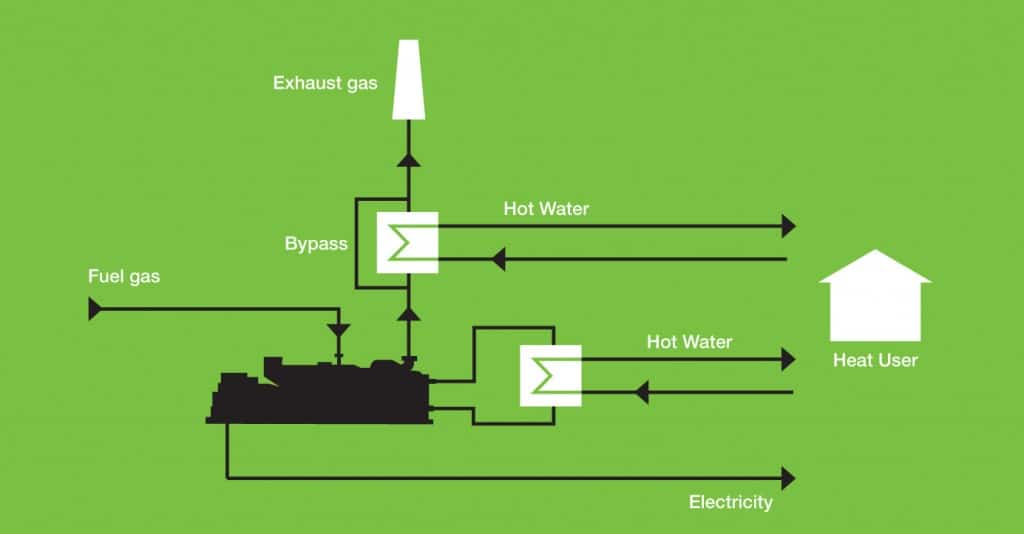 The biogas may contain high levels of water (humidity) and sulfur, depending upon the feedstock of the digester. Developers of biogas plants should consider the potential for gas contamination when designing their facility.  Please contact your local Clarke Energy sales office to provide you with technical instructions for fuel gas quality to understand the required specific limits. Clarke Energy can supply fuel gas treatment equipment either free issue, or as part of a turnkey scope of supply. These typically include carbon filters, gas dehumidifiers and gas boosters.