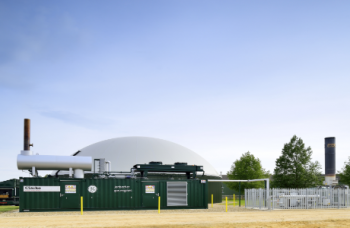 Allens Farm anaerobic digestion (AD) facility is located within the beautiful countryside of Colchester, which is said to be the oldest recorded town in Great Britain.

The farm is run by three partners – David Hunter, Charlie Lochore and Will Lochore, who felt an anaerobic digestion (AD) plant would make an excellent addition to their farming business. Austrian company Thoeni were contracted to construct the AD facility comprising of a digester, engineered to accept agricultural waste originating from 300 acres of onions, 300 acres of potatoes, 1,000 acres of cereals and 500 acres of maize. 8000 tonnes of waste is generated per annum to be converted into renewable energy via the AD process, strengthening the National Grid’s power supply.

Thoeni, an Austrian family run business, whom provide state of the art technology for waste management and generating renewable energy, contracted with Clarke Energy to install the new cogeneration system at the farm.

Clarke Energy engineered, installed and maintain GE’s Jenbacher JGMC 312 gas engine capable of producing 499kW of power, utilising biogas generated from the AD process. A full turnkey, packaged skid solution was also provided, including gas boosters to increase pressure to the operating level of the engine, dehumidification units to remove moisture from the biogas (optimising the operation of the engine), and flare to release excess gas. Surplus heat from the engine is recovered in a cogeneration configuration, facilitating combined heat and power used for digester heating.

“So far Clarke’s service has been excellent, and the Jenbacher engine has performed faultlessly”

The farm’s intention is to expand the plant utilising crop waste and to also add a pasteurisation unit, to feed wheat affected by ryegrass problems, brewer’s grains and sugar beet pulp without giving digestate problems.