Biomethane is as a green non-fossil source of energy. Biomethane is produced from biogas derived from organic matter (often from sewage, landfill, food waste or distillery waste) which makes it a renewable source of energy. Biogas can be dried and cleaned to remove impurities and upgraded to pure biomethane. Biomethane has a number of environmental benefits, the main one being that the methane produced by organic matter decomposition would be released into the atmosphere if simply left to decompose naturally.

Biomethane plants stop the release of methane and other harmful gases into the atmosphere and reduces the need for fossil fuels. Biomethane is chemically identical to natural gas and has the same applications as natural gas. Biomethane offers an alternative source of energy to fossil fuels.

The possibility to recover biomethane by feeding it into the network or using it in fuel has opened up a new market. Clarke Energy is responding to the need for biomethane recovery, specializing in biogas purification. We carried out an analysis of available purification technologies: washing with water, amine scrubbing, membrane purification, adsorption, etc. Eventually, Clarke Energy chose a technologically mature solution called membrane purification which is easily adjustable to any project size. The purification process named ValopurR relies on the use of high-performance membranes (Sepuran GreenR) whose output allows for a methane loss of <1% during CO₂ infiltration and other critical elements (steam, sulphur and halogenated elements, siloxanes, etc.). Clarke Energy guarantees results on biogas purification, proposing catalytic oxidization andbiogas compression and storage for bioNGV applications. 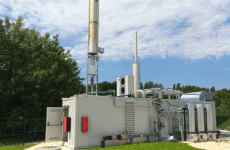 En anglais: The Sustainable Future of Industrial Energy Event – The University of Liverpool