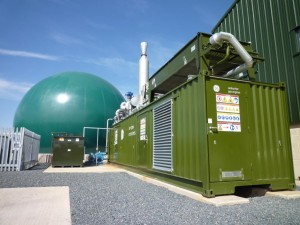 The main contractor and designer of the facility is the British anaerobic digestion specialist BiogenGreenfinch. The facility is one of three flagship plants that were funded by the Higher Education Funding Council for England’s ‘Revolving Green Fund’. Not only does the digestion facility divert biodegradable waste from landfill; it also produces renewable power in the form of electricity and heat. In parallel it provides a soil improver that is used to offset carbon intensive chemical fertilisers. The facility takes a variety of source-segregated food wastes which are pasteurised in a combined heat and power configuration using the heat from the GE Jenbacher biogas engine. The facility currently generates 499kWe of renewable electricity and is able to claim benefit under the feed-in-tariffs programme. There are also plans to supply the university campus with surplus heat via a district heating scheme.