Guy’s and St Thomas’ NHS Foundation Trust has become, with the help of Clarke Energy, one of the first healthcare trusts in London to produce its own electricity and heat through cogeneration – saving the equivalent carbon dioxide of around 17,000 passengers flying to New York and enough energy to power the city of Newcastle-upon-Tyne for a week. For a hospital, using a combined heat and power (CHP) plant is an ideal way of achieving energy efficiency, reduced carbon emissions, whilst making limited resources go further.

GE Jenbacher CHP units are installed at both Guy’s Hospital and St Thomas’ Hospital to produce electricity and heat for the facilities.

The waste heat generated by the engines is utilised for the hospitals’ heating, including space heating and hot water. Because the CHP units are embedded generators located within the hospital grounds it is also very efficient as virtually no electricity is lost during transmission.

Overall the units will reduce CO2 emissions produced by the Trust by almost 11,300 tonnes per year. It will also save the trust more than £1.5 million in energy costs annually – one of the largest savings from a CHP for an NHS trust.

At Guy’s Hospital Clarke Energy installed one Jenbacher CHP plant into the existing boiler house which is situated by the main entrance to the hospital. The engine is housed in a bespoke steel panel acoustic enclosure which includes an attenuated ventilation system to achieve a noise level of 70dBa @ 1metre. The J620 engine runs on natural gas with an electrical output of 3,041kW. Heat is recovered from the engine water system of 1,449kW via an interface plate heat exchanger. The exhaust gases from the engine are supplied to a high temperature hot water waste heat boiler, which has an integral exhaust bypass system 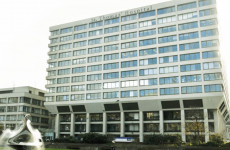 Clarke Energy working with NIFES Consulting Group also installed a Jenbacher JMS620 gas engine with a Cochran waste heat steam boiler to work alongside the 4 existing boilers at St Thomas’ hospital. The hot water circuit from the engine supplies heated water, via a plate heat exchanger, for use across the hospital, whilst the exhaust gases are utilised via a catalytic converter to heat the newly installed lead boiler.

Clarke Energy received a letter of support from Guy’s and St Thomas’ NHS Foundation Trust in relationship to the success of the project and service back up performance. Follow this link for more information.